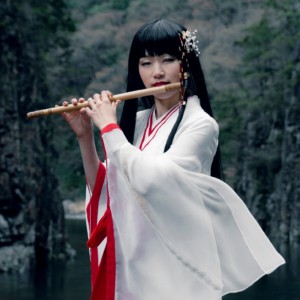 Sarah’s father is a Kagura dancer. She heard the sound of Japanese bamboo fluted -Kagurabue- when she was in her mother’s womb. Playing the Flute became second nature to her as a child. She was surrounded by music. As early as five years old she amazed the master flute players with her natural skill at producing notes on the flute just by watching them play. Playing the Shinobue and the Kagurabue is apparently her destiny. Her mother encouraged her to play violin, but she was only drawn to the flute. She played the Kagura drum and the metal flute in front of an audience when she was in elementary school. She plays the Kagurabue in Kagura festivals to accompany her father as he dances. She also played publically in competitions and received a number of awards.